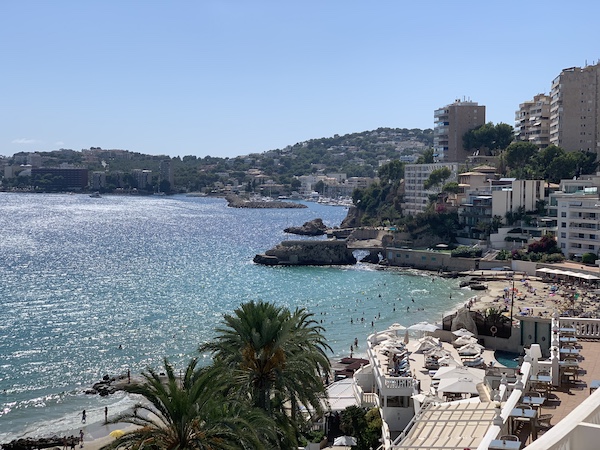 Last September, I spent two glorious weeks in Mallorca with my husband.   The largest island of the Balearic Islands, which are part of Spain, it is an ideal Mediterranean paradise.  Not too big but substantial enough to be interesting with plenty to do.

Earlier this year I read an article that described Mallorca as the California of the Mediterranean and indeed it is in many respects.   The island is replete with olive, almond, lemon, orange trees and vineyards.  Interestingly, Mallorca grows some grape varietals that can’t be found anywhere else in the world.  The locals love white and red wine but detest rose that they view as not really being a proper wine.  We were introduced to a lovely digestif, Herbes de Mallorca, that is now a favourite of mine, alongside Italy’s Vin Santo.

The beaches are stunning and the sea perfection.  September swimming in the Med is heavenly with its warm, clear waters and little fishes that bob and weave.  Most of the beaches are sandy unlike the Cote d’Azur and much of Italy where rock beaches are the norm.  Reprieve from the blazing hot sun was the shade of date palms that swoon in the gentle warm wind.  Mallorca is truly a place to unwind.  I plan to be there more often.

The locals who come from diverse backgrounds that you’d typically experience in cities such San Francisco or Vancouver, its people are friendly.  Happy to have tourists return, they were warm and eager to please.  Mallorca was busy with loads of German and British tourists with a smattering of folks from France, USA and elsewhere.  A few cruise ships had reappeared.  Everyone we engaged with spoke English.  At times communication was aided by my street knowledge of Spanish acquired in my late teens/early 20’s in magical Mexico.  Puerto Vallarta became my home away from home for a time.  I lived life large there.  Viva la Mexico donde festejamos mucho!

One day we went sailing with 3 other couples, one from Germany, another from France and a mother/daughter team from London.  The daughter was in her early 20’s and told us she had been to Mallorca before.  In fact, she spends a lot of time in Spain because of her career.  I assumed she was a flight attendant.  I was wrong.  Turns out she does PR for ABB Formula E World Championship, for electric cars.  Formula E is an FIA World Championship, making it the first single-seater racing series outside of Formula One.  Boy, was I wrong!

As a Master of NLP, I know that we think what we think based on our social conditioning and our filters.  We distort (distort something from its original intention), delete (details are deleted as we choose what to focus on) and generalize (taking a particular experience and applying it to a multitude of other situations).  Our perspective is ours alone.  Nobody else thinks like you do.  And how we perceive can make or break our day.

“It takes the same amount of energy to worry as it does to be positive.  Use your energy to think positive and positive things happen.”  – Joel Osteen

When she described her profession, it was far and away from the work of a flight attendant.  I loved this knowledge because she was not only an inspiring young woman (this was her first position post university), she provided me with a wake-up call of how I was limiting my perception based on my experience.

When I was nineteen, after spending time in Mexico, I knew that travel was important to me.  In my hierarchy of Values, travel was near the top.  I wanted a job where I could travel.  I applied to Canada’s then, two airlines to become a flight attendant.  I wasn’t fluent in French so that notion was a non-starter.  I eventually did travel with work, extensively within the finance industry.

My perception of her was a result of an old pattern of thinking.  The reminder was ‘never jump to a conclusion’.

I love to observe people, to learn their values, patterns, perceptions.  I’m fascinated by how we become who we are.  And what I have noticed is how we perceive the world can result in a range of emotion.  The pandemic has provided ample examples of this.  Three people have walked out of my life because I think differently to them with respect to Covid.

Some people think they cannot be friends with others because they think differently.  More’s the pity.  From my point of view, the world would be a boring place if we all thought the same.  I embrace my perspectives being challenged.

However, challenged is one thing whilst being put down is another.  All three of these people treated me rudely and condescendingly.  In the past I would have tried to make amends, stowing a part of myself away so as not to offend.  Now that I am 60-something and a whole lot wiser, I move onward and upward and engage with those who are uplifting.

When I mix with people, I ask myself two questions:

Are they a giver or a taker?  Do they uplift me or put me down?

In my world, uplifting givers rock my kasbah.

The Universal Law of Vibration:

“Everything is energy and that’s all there is to it.  Match the frequency of the reality you want and you cannot help but get that reality.  It can be no other way.  This is physics”.

Feelings, thought, and emotions have various vibrations.  Likes attract.  Act “As If” you are where you want to be until you’re there.  Your job is to keep yourself focused!  If people don’t share your vision, turn down their noise.